This page is for games which are set in a "futuristic" setting such as cyberpunk, sci-fi, post-apocalyptic wasteland etc where the name of the game starts A-M

​Arkfall is a new Sci-Fi LARP based around the TV Series "Defiance".

The centre point of the event is Arkfall, a small town in what were once the Midlands in the UK; the town itself is a trading outpost that sits at the confluence of four trade roads connecting the cardinal points of the country. Its central location has made it a hot spot for travellers and traders of all description and it’s said that if you really need to get your hands on something Arkfall is the place to find it.

The town is a small walled community that is run by a town council, they acknowledge that people from all walks of life will come through its gates and as long as nothing gets excessive they are willing to keep the law keepers on a fairly short leash.

For 5 years a state of reasonable equilibrium has existed between the various factions in the area but it could easily swing one way or the other. An important thing to remember is that the fall of the terraformers changed the UK on a fundamental level; this is because the terrible energies that were released had only a relatively small landmass to sweep across so the changes were even more catastrophic than those recorded on mainland Europe and other continents. The land twisted and roiled, new mountain ranges and vast chasms opened up and creatures and people were warped and twisted in to terrible mutants.

With the vast majority of its armed forces away fighting in the Pale Wars, social order utterly collapsed and soon the country was populated only by isolated walled communities fighting back against the chaos. Even though things have started to calm down by 2046 much of the UK would be unrecognizable to anyone from the last century. The terraforming event tore the country apart and the changed it both socially and geographically. The creatures that stalk the vast forests seem molded from the nightmares of people from the dark ages whilst savage bands of raiders seek to take by force anything they desire.

Arkfall is a place of great opportunity, here the bold can carve themselves a future with their bare hands and the meek get crushed beneath the dreams of others. Which will you be?

Cataclysm is a post-apocalypse based LARP system set in a far future where the golden age of mankind has fallen. It is a mixed NERF and melee combat system with PvE and PvP elements.

Based from the success of the Hive system, Cataclysm is played in gangs, or warbands, as part of a larger Faction. Warbands will be vying for territories and resources over a campaign map and will take on Marauders, Mutants, each other and even worse in a war for survival against a merciless future

"Earth was wasted, we had no hope. We had to escape, so a plan was made. There was a lottery, politics, elections... I was one of the chosen. My parents, elderly at the time, cried with happiness. I did also, I guess. If I knew then what I knew now... I won't waste any energy on regrets. Help us. They broke the barrier and are coming again. God help us all!"

Set within its own unique background, Dark Colony LRP will bring science fiction and post-apocalyptic themes together upon a vast alien planet.
Designed to provide a personal role-play experience within a burgeoning environment with players versus the world, player versus the player is not the aim of this game.

Aiming to bring a high amount of fear, frenzy, and panic, death will come easily if you are not careful. Mistakes can be lethal, however we are sure you have what it takes to survive. That said, we prefer that your character survives, the Dark Colony team wish to aid your character plot and growth within the system.

Bringing to you a rich background involving varying alien species, you have the chance to become involved in discovery, survival, religion, politics, conflict, intrigue, and unravelling the unknown. This is not a game based upon gathering resources but engaging in in-depth role play.

Choosing from a range of skills, there will be character progression, although it has been cleverly designed to enable any character to specialise personally to their tastes, and even a starting character, should they wish, start with skills equal or perhaps better than an established character.

You are a hero, you survived what has happened, and thus that makes you above the norm. But be warned. You. Are. Not. Unbreakable.

From Shadows is set in a futuristic Cyberpunk world where corporations hold excessive power over the governments and the gritty undercity dwellers are just getting by in life. For some, those who choose to knuckle down and join up to The Agency, life is a little better and that is where you come in. In this game we use a mix of Airsoft and LARP Weapons to simulate combat. Combat is underpinned by our foundation of roleplay and everything should be reacted to; getting slashed with a sword hurts and having a grenade go off next to you is disorienting.

From Shadows is a safe environment for everyone that comes to play our game. In this world there is no such thing as sexism or racism; race and gender are simply not a concern in the 2040s. Everyone will be made to feel welcome by the game team and players should strive to do the same to make sure everyone is included. 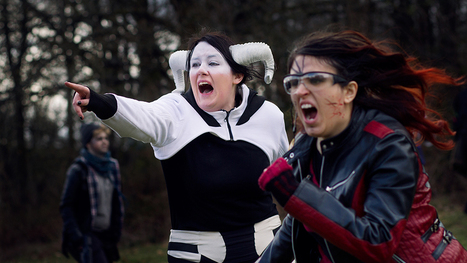 Set in an alternative near-future reality in which super-powered beings are commonplace, Future's End is an 18+ PvPvE Live Action Role Playing game designed for a wide variety of archetypes.

Earth is no longer the sole preserve of humanity, with new beings now walking among them in the form of mutants, aliens and ethereals. Future's End players embody these meta-types, gifted with super-powers which they use to try and better the world, as well as protect it from those who would use their powers for evil.Set in an alternative near-future reality in which super-powered beings are commonplace, Future's End is an 18+ PvPvE Live Action Role Playing game designed for a wide variety of archetypes.

They are faced with the tough choice of whether to become part of Operation:Alpha (an independent super-hero faction) or Project:Omega (a government employed body) as they face off against some of the worlds most powerful supervillains, all the while trying to manipulate the media in their favour so as to see their faction triumph over the other...

Green Cloaks, a product of Virium Entertainment, is a NERF-based LARP system founded in 2012 by Enys Coggles with collaborator Adam Wojcik. As a grassroots system it is perfect for individuals new to LARP wanting to try out the hobby, but it has plenty to also grab the interest of more experienced LARPers and roleplayers. The system offers a friendly atmosphere and an enthralling plot for people of all levels of LARP experience.
​
WEBSITE
http://www.greencloaks.co.uk/
​
FACEBOOK
https://www.facebook.com/GreenCloaks/

The year is 2170. The Earth’s magnetosphere has failed, leaving a sprawling collection of colony worlds competing for resources in an ever-violent galactic struggle. The old Colonial Administration struggles to hold the fragile peace together while political factions, corporations and separatists threaten to overthrow the old Terran regime. Only one force stands ready to face these challenges head-on, to wade through the mud to stand between order and chaos.
They are the men and women of the Colonial Defense Force Marine Corp.

Gruntz is EYELarp’s futuristic sci-fi action LARP. Digging deep into 80’s action movies for inspiration, players join the fight to protect their colonies from the dangers lurking on the last frontier – armed only with a pulse rifle and bad-ass one-liners.

Gruntz has a slim rule-base, uses airsoft and encourages players to get their arses on the line and take the fight to the enemy – be it through combat, tech or medical skills. Crewing is free and oodles of kit is available on loan

The Deathwatch have released a summons for assistance to engage on missions into the bowels of the spacehulk "Heretics fall". 5 man missions will be launched into the bowels to do battle with the known xeno filth of a genestealer cult activity known to exist within ... as well as neutralise other threats rumoured to exist in its depths. The mechanicus have made a forward operating base to launch missions into the interior of this hostile environment and provide tech, arms and briefing facilities.
Heretical LARP is a WH40k inspired LARP

Humanity Ascendant is a Science Fiction Live Action Role Playing Game.
It is set in the years 2506 onwards, and is set an in apocalyptic world stalked by gangs, mutants and worse. Think of a combination of Mad Max, X-Files and Evil Dead all rolled into one scenario.
Players take on the role of survivors of the Apocalypse, assigned to rediscover the world around them for the sake of the Human Race. Humanity Ascendant is an in-development Post-Apocalypse setting LARP system using state of the art Outdoor Laser Tag Equipment.

The Lost Star Chronicles. We are a newly formed not for profit organisation that focuses on running a Live Action Role Play community. The primary goal of the group is to have fun by bringing our favourite characters to life and to make friends. The entire group is focused on producing Live Action Role Play events, fantastical stories, and production of event props, costume and LARP weapons. The events that we produce range from High Fantasy to Colonial Marines sci-fi style events.

Welcome to the world of Magpie, the Live Action Role-play system where players can explore new worlds, derelict spacecraft and other strange places looking for alien civilisations, human ruins from before the Fall, weird technology or simply make some money and maybe obtain answers to why so many died across the galaxy when the ‘Fall’ occurred.

Mandala LRP was set up by a group of people who enjoy running and playing live roleplay events. It is not a money making venture and the intention is to provide a stable backdrop for successful events. Rather than limit ourselves to one system, or one style of play, Mandala is intended as an umbrella organisation which can run any type of event in any type of system. The only constant factors being quality of event, commitment to player satisfaction and enjoyment for the refs and crew. We have run Sci Fi, Modern day and Fantasy events.

Metro is EYE Larp’s survival horror experience.
Set just a few years after the end of the world, small groups of survivors cling together for safety in isolated encampments. Outside these tiny enclaves of civilisation, everything is a danger – from bands of savage marauders to the spore-ridden poisoned environment.
Metro sees you playing as one of these few remaining survivors of the old world. Every day is driven by the search for the bare necessities you and your fellow survivors need to preserve life and limb, whilst fending off the ever-present dangers of the world outside your camp. And of course, sometimes you need to decide whether you care about your own skin more than that of the group…
Metro follows EYE Larp’s free-form, rules-light structure, with a few specials thrown into the mix. Players live in-character, bringing their shelter with them, and must scavenge for food over the course of the weekend! The game uses airsoft weapons, though ammunition is the rarest commodity in the world. And rule one of the gulag? No white lights. White light attracts the horrors that lurk in the wilderness…